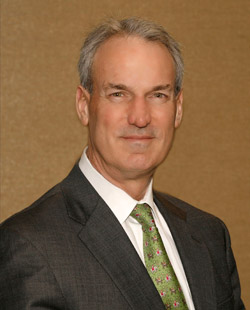 Douglas Wood, MD, Professor & Interim Chair of the Department of Surgery, was elected International Councilor at the European Society of Thoracic Surgeons (ESTS) Annual Meeting in Naples, Italy (May 2016).

ESTS is the largest specialty society of general thoracic surgery in the world, with over 1,500 members from more than 70 countries. Among other activities, ESTS leads several worldwide courses in thoracic surgery, establishes and publishes guidelines and best practices and owns and manages a large clinical database. It is viewed as a major organization representing the general thoracic subspecialty within cardiothoracic surgery. The organization is run by the Council, which is made up of the officers of ESTS, several at-large Councilors, and one International Councilor who serves a three-year term. The International Councilor represents “the rest of the world” in this European-based specialty society and Dr. Wood is the fourth person to hold this role.

The other major cardiothoracic organization in Europe is the European Association of Cardio-Thoracic Surgery (EACTS). A number of years ago, EACTS also developed a single “International Councilor” position to represent the rest of the world. Dr. Wood was the third person to hold this position from 2010-2013 and is now the first person to serve as International Councilor for both societies. He has been deeply involved with both societies for many years, working behind the scenes to facilitate collaboration between the groups. He is excited for this opportunity and with it the ability to impact thoracic surgery education, policy, and collaboration in Europe over the next years.

The Department and School congratulate Dr. Wood on this office and the opportunities it affords.