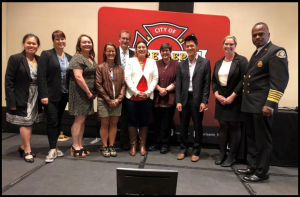 During its annual Awards Luncheon on May 16, the Seattle Fire Department presented its Certificate of Recognition to a group of clinicians and first responders who helped save the life of Deena Hernandez, a 21-year-old woman who fell from her paddleboat into freezing water in January of 2018. In addition to the team from Harborview, the honorees included medics, firefighters, members of the U.S. Coast Guard and representatives from Washington State Ferries.

By the time responders reached her, Hernandez had been in the water for more than two hours and was barely clinging to life. Thanks to the heroic efforts of every person along the way, good timing, excellent medical care and not a small amount of luck, Hernandez survived and made a full recovery.

At the ceremony, Seattle Fire Department Chief, Harold Scoggins, told the story of Hernandez’s dramatic water rescue and journey to the hospital, followed by Hernandez’s own account of her harrowing ordeal.