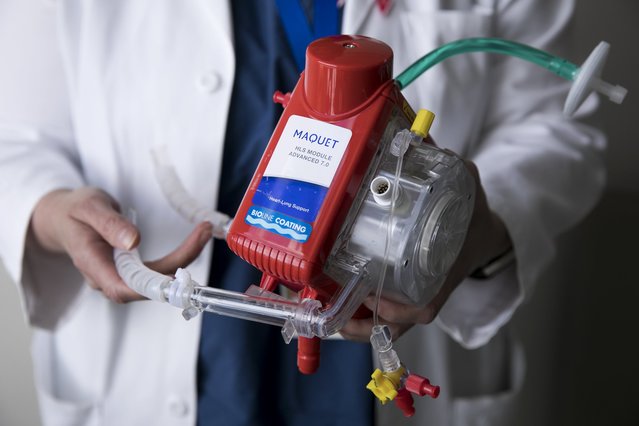 The extracorporeal membrane oxygenation machine, or ECMO, at Harborview Medical Center acts as an artificial lung to oxygenate blood when the body cannot, and this is the piece that handles the blood. (Bettina Hansen / The Seattle Times)

Just before 3 a.m., the distress call came in to the Coast Guard’s Small Boat Rescue Station in Seattle: A young woman and another person were on a weather-battled paddleboat in the middle of Puget Sound — and they were sinking.

The Coast Guard’s Travis Curley, 31, and three other crew members raced their 45-foot response boat toward the reported location of the distressed boaters. As they rounded Duwamish Head at West Seattle’s northern point, they heard from dispatchers that the woman had screamed just before the line went dead.

“Most likely, that means she was now in the water,” said Curley, a boatswain’s mate first class, recounting the Jan. 21 rescue.

Curley and his crew pulled her from the water and performed CPR before she was loaded into an ambulance at the Fauntleroy Ferry Terminal in West Seattle.

By the time she reached Harborview Medical Center, her body’s core was at 77 degrees and it had been at least four hours since her heart or lungs had worked on their own.

Had it not been for the use of a machine that re-oxygenates and warms patients’ blood, “We don’t think she would have survived,” said Dr. Eileen Bulger, the UW Medicine physician who runs the hospital’s trauma unit. MORE